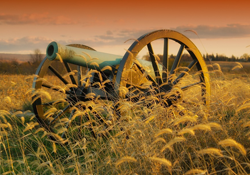 Kirby Smith’s Confederate Army of Kentucky bypassed the Cumberland Gap and entered drought laden and extreme heat wave stricken Kentucky in mid August 1862, with his advance cavalry force, mostly from Louisiana under Col. John Scott, reaching Big Hill on August 23. After a short battle at Big Hill, Scott’s troopers dispatched Federal Kentucky cavalry and a partial regiment of Federal Tennessee infantry. Scott came on to Richmond and demanded the surrender of the town. Spying Union infantry advancing from Lexington, Scott retired and rejoined Kirby Smith in the areas around London.

The Confederates made their way through the rough terrain of southern Kentucky, with Confederate infantry and artillery under Brig. General Patrick Cleburne crossing Big Hill on August 29th. Scott’s cavalry discovered and fought larger Union forces in the vicinity of Rogersville north of Kingston in the late afternoon of August 29th, with the Federals forcing Scott to retreat. Federal cavalry chased Scott down the main road, known as the Old State Road to Bobtown, running into Cleburne’s infantry force camped in the area. After a short but spirited fight, the Federals retreated with few casualities.
Federal Brig. General Mahlon Manson sent word to Major General Will “Bull “Nelson, who was in Lexington, about the activity on August 29th. Nelson sent word to Manson to bring his force to Lancaster, and Nelson would meet him there. But Nelson’s reply came too late.

On the morning of August 30th, Manson ordered his four regiments to an area just south of the Mt. Zion Church, placing three regiments on the east side of the Old State Road and one on the west. Confederate Brig. General Patrick Cleburne’s division started moving north toward Kingston and the Federals before daylight. Another Confederate division under Brig. General Thomas Churchill began moving from Big Hill to the Kingston area. Manson began an artillery bombardment at about 7 AM, and the Confederates brought their artillery up and began to return fire. After a couple of hours, Cleburne began his assault on the Federal left flank. After a short while, Manson felt his left flank was being exposed, and Manson ordered troops from the west side of the Old State Road to re-enforce those on the right. Unbeknownst to the Federals, Edmund Kirby Smith had ordered Churchill’s Confederates, mostly from Texas and Arkansas, to use a hidden ravine, now known as Churchill’s Draw, to attack Manson’s weakened right flank. A second Federal brigade under Brig. General Charles Cruft began arriving on the field from Richmond, and they entered the fight one regiment at a time.

Churchill’s assault on the Federal right was just too much. Manson’s right flank collapsed under the pressure, and coupled with Cleburne’s pressure on the Federal left flank, the entire Federal line retreated in poor order to the vicinity of the Rogers House, now the Visitors Center. It was a little past eleven in the morning. Earlier, General Cleburne had been wounded in the jaw and had to retire from the field, leaving his force under the command of Colonel Preston Smith.

Realizing his position near the Rogers House was not very good, Manson and Cruft retreated to the area of the Duncannon Road/Old State Road intersection, about a mile north of the morning fight. Manson placed his shattered brigade on the east side of the Old State Road and Cruft’s brigade was placed on the west side with two regiments which had not been engaged in the earlier fight.
After some re-organization, Kirby Smith moved his Confederates up the Old State Road, and ordered Churchill’s force to attack the Federal right flank. After about a thirty minute fight, the entire Federal force retreated in poor order for Richmond just after 1:30 in the afternoon.

By this time, overall Federal commander Bull Nelson had learned of the fight at Richmond and arrived on the field. He ordered what was left of his command to form a line in the Richmond Cemetery just south of the city of Richmond. With sunset fast approaching, Kirby Smith again attacked the Federal right flank, forcing it and then the entire Union line to collapse through the cemetery and panicked Federal troops filled the streets of Richmond in mass confusion. Kirby Smith had ordered Col. John Scott’s cavalry to make a wide sweep to the west and north of Richmond, in hopes of cutting off any escape routes for the Federals. Just after dark, Scott’s troopers hit the routed Federals about two miles north of Richmond, and captured nearly the entire command, including Brig. General Manson. Of the 7,000 Federal troops engaged, only about 500 were able to escape the Confederate onslaught.

With the arrival of Brig. General Henry Heth’s division, Kirby Smith’s remaining two divisions went on the capture Lexington on September 1 and Frankfort on September 2nd, the only Federal state capital to fall during the entire war. Kirby Smith forces were scattered across the Bluegrass, ranging as far as Shelbyville to the west and Florence to the north.
With Confederate Braxton Bragg’s army’s arrival in west central Kentucky later in September, it seemed that Kentucky had fallen to the Confederates. But the Federal victory at the Battle of Perryville on October 8th dashed those hopes, and the Confederate defeat there forced both Kirby Smith and Bragg’s armies to retreat back into Tennessee by the end of October 1862. To their disadvantage, Bragg and Kirby Smith were never able to combine their armies into one cohesive fighting unit.

The Battle of Richmond is classified by most Civil War scholars as the most complete Confederate victory of the entire war, and it is the only example during the war of the Federal force “ceasing to exist” and the end of the battle.

The Battle of Richmond