In response to the COVID-19 outbreak and at the request of a presidential order and Governor Andy Beshear to limit person to person interaction,
the Madison County Government and its related offices are open to the public by appointment only. Online, Phone and Mail options remain available. 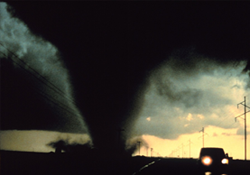 Tornadoes are nature's most violent storm and can leave an area devastated in just a matter of seconds. A tornado appears as a rotating, funnel-shaped cloud, striking the ground with whirling winds up to 250 mph or more. Damage paths can be in excess of one mile wide and 50 miles long, "tornado tracks" or paths as long as 200 miles have been reported. In an average year, 800 tornadoes are reported nationwide, resulting in 80 deaths and over 1,500 injuries. Tornadoes can strike at any time of the year; however, they occur most frequently during the months of April, May, and June.

What to do before a tornado

Know the terms used to describe tornado threats. Tornado Watch – means tornadoes, severe thunderstorms, or both are possible. Stay tuned to local radio and/or television reports. Keep a watch on the sky. Tornado Warning – means one or more tornadoes have been sighted or indicated by radar. You should take shelter immediately.

If you see any rotating funnel-shaped clouds, report it immediately by dialing 911. Know the locations of designated shelter areas in public facilities, such as schools, public buildings and shopping centers. Prepare a family disaster supply kit. Be sure everyone in your household knows where to go and what to do in case of a tornado warning. Make an inventory of your household furnishings and other possessions. Supplement the written inventory with photos or video. Keep these in a safe place away from the premises.

What to do during a tornado

Seek shelter immediately. Whenever severe weather threatens your area, listen to the radio and television for the latest information and instructions. When a tornado has been sighted, stay away from windows, doors and outside walls. Protect your head from falling objects or flying debris. Take cover immediately, wherever you are: House or small building – go to the basement or storm cellar; if there is no basement, go to the interior part of the structure on the lowest level (closets, interior hallways). In either case, get under something sturdy (such as a heavy table) and stay there until the danger has passed.School, nursing home, hospital, factory, or shopping center – go to the predesignated shelter area. Interior hallways on the lowest floor are safest. Stay away from windows and open areas. Remember to always cooperate with the staff or authorities.High-rise building – go to a small interior room or into a hallway on the lowest floor possible. Vehicle or mobile home – get out immediately and go to a more substantial structure. If there is no shelter nearby, lie flat in a low lying area with your hands/arms shielding your head. Remember with tornadoes usually comes a lot of rain, so watch for flooding in these low lying areas.

Do not attempt to flee from a tornado in a vehicle; vehicles are no match for the swift erratic movement of these storms.

What to do after a tornado

Use great caution when entering a building damaged from high winds. When entering or clearing a tornado damaged building, be sure that the walls, ceiling and roof are in place and that the structure rests firmly on the foundation. Look out for broken glass, downed power lines, leaking natural or propane gas lines, and electrical lines.Check for injuries. Do not attempt to move seriously injured persons unless they are in immediate danger of further injury. Call for help immediately. If the victim is unconscious or has head or facial injuries, be sure the head and neck are supported if you must move them, and clear the airway so that the victim will not choke. Maintain body temperature with blankets. Be sure the victim does not become overheated. Never try to feed liquids to an unconscious person.