We currently are experiencing issues with the downloading of documents from our site.
Toggle Bar 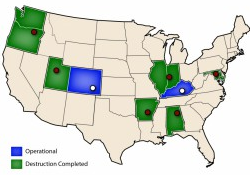 The Chemical Stockpile Emergency Preparedness Program (CSEPP) was created in 1985 when the US Congress passed a law directing the Army to dispose of its aging chemical weapons inventory with maximum protection of the public and environment as its primary consideration. CSEPP is a partnership between FEMA and the U.S. Department of the Army that provides emergency preparedness assistance and resources to communities surrounding the Army’s chemical warfare agent stockpiles.

CSEPP’s mission is to “enhance existing local, installation, tribal, state and federal capabilities to protect the health and safety of the public, work force and environment from the effects of a chemical accident or incident involving the U.S. Army chemical stockpile.” Since its inception, CSEPP has worked to educate and enhance emergency preparedness in communities surrounding the chemical stockpile stored at the Bluegrass Army Depot. Until the chemical stockpile is safely destroyed, CSEPP will continue to support efforts to ensure a community’s preparedness and safety in the unlikely event of a chemical agent accident

Kentucky CSEPP has two IRZs, six PAZs, and two host counties which are affected by the chemical stockpile. Madison County, where the Bluegrass Army Depot is located, and  Estill County are considered to be in the Immediate Response Zone (IRZ). Clark, Fayette, Powell, Estill, Jackson, Rockcastle and Garrard Counties make up the Protective Action Zone (PAZ). Jessamine and Laurel Counties are considered Host counties, in which citizens of the IRZ or PAZ may be deployed.

CSEPP protects people who live and work near installations with chemical stockpiles in the unlikely event of a chemical accident or incident. The Army is fulfilling its mission to eliminate aging chemical munitions and warfare materials in accordance with international treaties and national policy. To date, chemical stockpiles have been destroyed at Aberdeen Proving Ground, Md.; the Newport Chemical Depot, Ind.; Pine Bluff Arsenal, Ark.; the Anniston Army Depot, Ala., Umatilla Army Depot, Ore. and the Deseret Chemical Depot, Utah. A stockpile on Johnston Atoll, an island in the Pacific Ocean, was also completely destroyed in 2000. CSEPP will remain in place until all stockpiles are completely destroyed.
Where Are These Stockpiles Located?

The two remaining stockpiles are secured at the Blue Grass, KY. and Pueblo, CO., U.S. Army installations. Each community provides its residents important emergency preparedness information. The chemical stockpiles at the Edgewood Area of Aberdeen Proving Ground in Maryland, the Pine Bluff Arsenal in Arkansas and the Newport Chemical Depot in Indiana were completely destroyed. In 2000, a stockpile on Johnston Atoll, an island in the Pacific Ocean, was also completely destroyed.