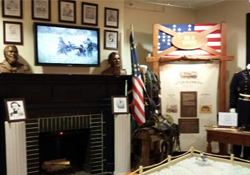 The center, housed in the historic 1811 Rogers House, is like no other Civil War Visitors Center in the nation.  A one-of-a-kind laser guided topographical map gives guests a bird’s eye view of the battlefield, showing troops' movements, important buildings and homes of the period.  A locally produced documentary film displays, and artifacts found on the battlefield complete, this unique experience.

The Battle of Richmond witnessed the most complete victory one side had over the other during the entire Civil War.  The Confederates, under Major General Edmund Kirby Smith and Brig. General Patrick Cleburne, routed the Federal forces under Major General William “Bull” Nelson, in three separate engagements spanning nearly the entire length of Madison County.  The Federal forces “ceased to exist” when the battle ended.  The Confederates went on to capture Lexington and Frankfort, the only time a Federal state capital fell during the entire war.

The Battle of Richmond